Feist @ Church of the Intercession in October (more by Jessica Amaya) 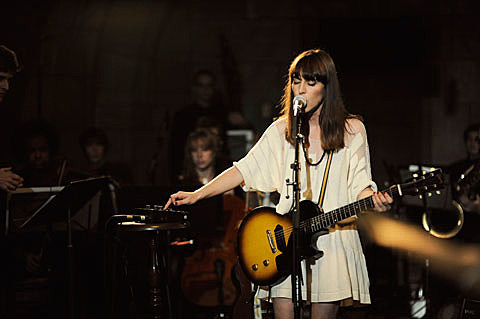 FRIDAY
Feist and her band (featuring Mountain Man as backup singers) will play the Riv.

SBTRKT makes his live (not DJ like North Coast) Chicago debut at the Bottom Lounge.

Star Slinger, Shlohmo, and Shigeto can be found at Lincoln Hall.

Electric Six play their second to last show of tour with Kitten and Andy D at the Double Door.

If it's disco you are looking for, check out Miami Horror and Hey Champ at The Mid.

Big Sean, Cyhi The Prince, and Shawn Chrystopher will play a sold out show at Metro.

Loyal Divide, Lazers and Fast and Shit, and Verma will play the Empty Bottle.

Danava and Thrones are playing an early show at the Empty Bottle, while Wooden Shjips, Birds of Avalon, and The People's Temple will handle the late night.

The Wombats will play a sold out show at Subterranean, with support from The Postelles and The Static Jacks.

Common speaks about his recently published memoir One Day It'll All Make Sense at the UIC Forum. CANCELED

Chaperone, Dastardly, and Grandkids are playing the Beat Kitchen.

Beer Hoptacular! returns to the Aragon Ballroom for a second year.

SUNDAY
Chicago's own Radar Eyes and Wax Idols will play Cole's along with Terry Malts.

The Civil Wars and Milo Green will play the Vic.

A Winged Victory For The Sullen, Benoit Pioulard, and Ken Camden will play Lincoln Hall.