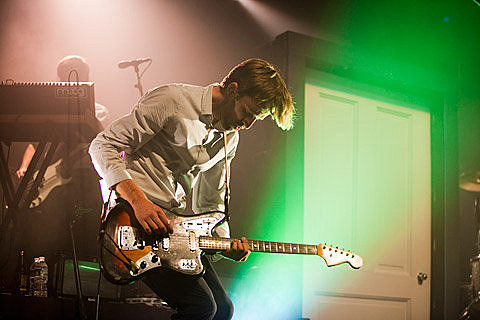 The weather is finally starting to turn up, so head out this weekend and catch some great shows!

FRIDAY
Cut Copy, Holy Ghost!, and Kid Color are playing the Riv. You can stream Holy Ghost!'s debut LP over at their label DFA's website. Afterwards, Cut Copy has a DJ Set over at Debonair Social Club, and Holy Ghost! has their own at Smart Bar.

Davila 666, The Yolks, and Day Creeper are playing Empty Bottle.

The David Bromberg Quartet are playing both Friday night, and Saturday night at SPACE with Angel Band.

SATURDAY
Sharon Van Etten is playing Lincoln Hall with Little Scream, and In Tall Buildings. Little Scream will be opening up for The Antlers on their Burst Apart tour, starting in mid-May. That'll hit Chicago on June 11th at Metro.

Wire (who stopped by Fallon on Tuesday night to play "Red Barked Trees" & "Map Ref 41N 93W"), and Lasers And Fast And Sh!T are playing Metro.

Daedelus (who played the BrooklynVegan / M for Montreal Day Party at SXSW) is playing Bottom Lounge with Tokimonsta, and Shlomo.

Robert Plant & The Band of Joy , and the North Mississippi Allstars are playing the Auditorium Theatre.

Emmylou Harris will be performing at the 2011 Blue Jean Gala, which is the annual benefit for the Old Town School of Folk Music.