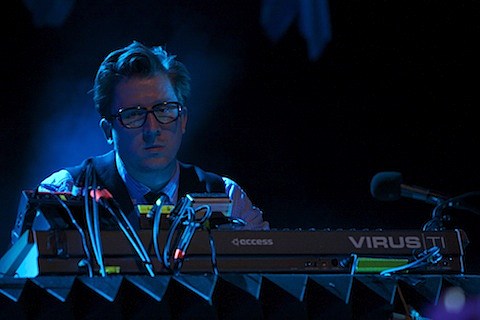 Remember when we said Wilco had a big announcement to share with fans? They've gone and booked a July 8 show at Fifth Third Bank Ballpark in Geneva, IL with openers Andrew Bird and soul outfit The Congregation. If you happen to be a "Wilco World" member, presale tickets are yours for the taking beginning on Wednesday (April 4), at 10AM CST. Though general sale information is forthcoming, tickets will be available this coming Saturday (April 7), at 10AM CST. Happy NOT April Fools Day. Maybe The Whole Love on piano roll would have been cool after all..

This past weekend, frontman Jeff Tweedy played two solo shows at the Vic Theatre. We already gave you the rundown of his Friday night performance and you can check out his Saturday night setlist at the bottom of this post. Covers included The Handsome Family's "So Much Wine" and The Kinks' "Strangers" (recently done by Wye Oak).

Full Saturday night setlist and all known 2012 tour dates, below..