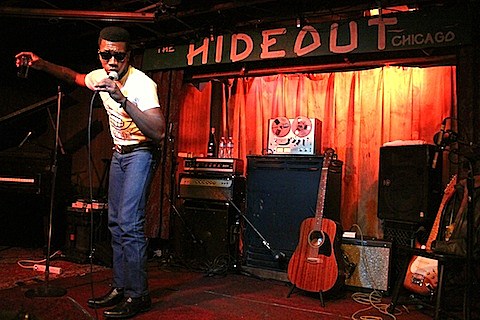 Last night (Thursday, April 19), Willis Earl Beal played a sold-out hometown show at the very intimate Hideout. Unlike his recent set at the House of Blues, Willis was the centerpiece and the packed crowd cheered loudly after each song. Were you there? What did you think of the show? Check out some live video footage at the bottom of this post.

This week's Chicago Mixtape (Mixtape 062) features a live version of "Sambo Joe From The Rainbow," a cut off of Willis' debut LP Acousmatic Sorcery. CM will post a new tape on Monday, so you have until then to download the current one, which also includes tracks from Santah, Joan of Arc, Bloodiest, and others.

Willis plays the Questlove-curated "Shuffle Culture" in Brooklyn tonight. His next hometown show is a performance on Friday (July 13) of Pitchfork Festival 2012. All known 2012 tour dates and some video footage from last night's show, below...