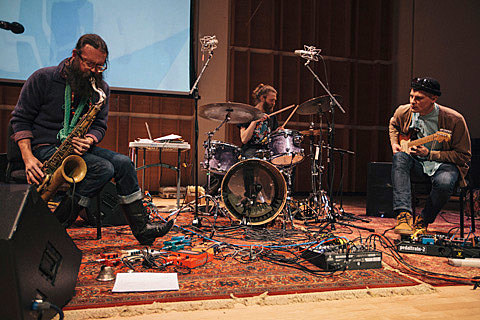 Brooklyn experimentalists Zs and Guardian Alien will be embarking on a spring U.S. tour together this March. Greg Fox (ex-Liturgy) provides percussion for both groups, and will be pulling double duty on this tour. The two groups will arrive in Chicago on March 8 for a three-night run at various venues. They'll play Experimental Sound Studio on March 8, Swerp Mansion on March 9, and the Empty Bottle on March 10. Instead of playing as Zs and Guardian Alien at Swerp, they'll be breaking off into their solo projects: Diamond Terrifier, Patrick Higgins, and Greg Fox. Advance tickets for their Empty Bottle performance are on sale now.

Zs celebrated their 10th anniversary as an outfit last fall by releasing a retrospective boxset, titled The Complete Sextet Works: 2002 - 2007. Maybe you caught them at the Empty Bottle while they were on tour in support of it.

Guardian Alien's sophomore album, See the World Given to a One Love Entity, hit stores last year via Thrill Jockey, and they did quite a bit of touring in support of it.

All known Zs // Guardian Alien tour dates and a couple of videos are below...

Guardian Alien - "See the World Given to a One Love Entity"